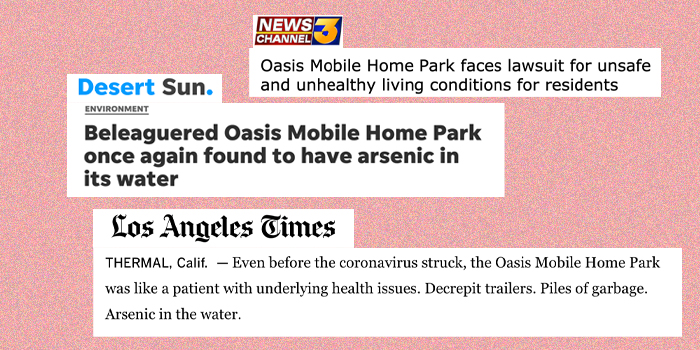 One man died when his mobile home was engulfed in flames the night of April 29 at the Trails End Mobile Home Park in Fresno County. According to news reports, a generator was being fueled while it was running and it caused the deadly fire. Sixty mobile homes are operating at the mobile home park while the park itself is not licensed, according to reports.

Hundreds of miles to the south, in the Eastern Coachella Valley, more than 1,000 people live in the Oasis Mobile Home Park (Oasis MHP). For years, residents have asked for help relocating to a safe community. Since January, residents have been in an active lawsuit against ownership of the park to correct decades of unjust living conditions that owners refused to correct adequately.

Oasis MHP appears to be similarly unlicenced, and is marred by neglect. Residents are dependent on contaminated water that is regularly shut-off. Mobile home rooftops rip from the fierce winds of the desert. Income levels at the park surely contribute to these living conditions, since families do not make enough to find new housing or make needed repairs. Complicating issues, Riverside County lacks enough affordable housing to allow relocation without building new units.

The conditions experienced by residents at Oasis MHP are not new to the communities of the ECV. About 14 years ago, a mobile home park on tribal land near Oasis called Duroville was ordered by federal court to shut down for lacking the necessary permits and sustaining unlivable conditions. It was similar to what Oasis MHP residents experience today, such as faulty electrical wiring, contaminated drinking water, and failing septic tanks causing sewage lagoons.

The similarities at Oasis MHP with Duroville are almost identical. A legacy of neglect and the dire need for safe, stable, affordable housing is urgent for low-income communities of color who are forgotten by the government.

And similarly, a fire that took place hundreds of miles away matters to residents of Oasis MHP, and all mobile home parks in the state, because it points to systemic problems. This type of housing is rarely regulated and conditions in unpermitted and unlicensed mobile home parks are often substandard and unsafe.

As the governor prepares to release his May Revise budget this week, residents of Oasis expect that their advocacy throughout 2021 pushing for a $30 million to support relocation will culminate in an appropriation in the May Revise Budget. Residents have a clear vision, have identified the relocation plan, and have the support of dozens of groups and individuals committed to funding implementation and construction of new housing. County, state and federal funds must assist this effort.

State leadership can signal this week that California mobile home park residents should not have to fear living in unsafe conditions, but rather that they have the right to fair housing. Oasis MHP presents an opportunity for the state to establish a model to provide relief to mobile home park residents throughout the state. With an historic budget surplus, the time is now to provide transformative change for Oasis MHP residents, while at the same time improving climate resilience and availability of affordable housing in the region.

City of Merced Must Invest COVID Recovery Funds in Premium Pay for Farmworkers
Farmworkers are one of the most disproportionately impacted groups by the COVID-19 crisis. They kept the nation’s food supply going while many of us were able to shelter-in-place and work remotely, yet the City’s proposed spending plan does not provide much-needed assistance to farmworkers.
California Air Resources Board Program Incentivizes Greenhouse Gas Emissions and Pollution from Dairy and Pig Farms
One of California’s primary climate programs, the Low Carbon Fuel Standard (LCFS), is dramatically overstating the climate benefits of using methane gas sourced from factory farms as a transportation fuel.
​​Budget Breakdown: The Good, Not so Good, and Unfinished Business in the last chapter of California’s Wild Budget Year.