How segregation lives on in Central Valley water access

By Jill Cowan and Jose A. Del Real 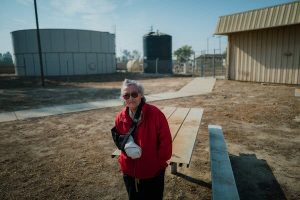 There was no running water anywhere in the small farm settlement, 20 minutes southwest of Fresno. And almost everyone but her was African-American. Those two facts, she would come to realize, were deeply intertwined.

“When I arrived, there weren’t even any houses or anything. There was a family that lived here, but they lived in just a tent. I suffered,” said Ms. Carbajal, 85. “There was no water, nothing.”

She and her husband spent decades roaming in search of places to fill up giant jugs of water they carried back home in their car. She said she drank water from almost all over California because her husband was “andariego” — restless.

“I grew up in a city and look where I ended up,” she deadpanned, her eyes turned slightly upward, looking around at vast fields of farmland. Ms. Carbajal came to the United States as part of a mass diaspora of migrant Mexican laborers that transformed the Central Valley during the 20th century.

But what she did not know at the time was that her arrival also punctuated another mass migration that had brought tens of thousands of black American farm workers from the Cotton Belt and the Dust Bowl in search of a better life.

Against the backdrop of Jim Crow segregation, anti-black curfews and discriminatory banking practices, those black families had very limited options. Often, the only places they could settle were in isolated, waterless communities where businessmen were willing to sell land to black people.

The lack of potable water was not just bad luck: It was precisely that fact that made it possible for black and Mexican farm workers to purchase land in places like Lanare, said Michael Eissinger, a lecturer in history at Fresno City College.

Nobody else would live there except those who had no other choice. “That’s why these communities exist. They are the direct response to Jim Crow practices in the San Joaquin Valley going back to the 19th century,” Mr. Eissinger told me recently.

Today, the legacy of segregation and racism echoes in the vulnerable and isolated water infrastructure of these towns, which are now primarily Hispanic, a demographic transformation that kicked off in earnest in the 1990s.

Like virtually everyone in Lanare at the time, Ms. Carbajal and her husband purchased land from a local businessman named Eugene Tomasetti who sold parcels to black and Mexican farm workers in the 1950s. She recalls how each month she would trek to a bar nearby to make her payment to Mr. Tomasetti, who would give her signed receipts on napkins, cigarette rolls or any loose papers he could find.

Even after wells and pipes were drilled in Lanare in the 1970s, according to Ms. Carbajal and others who have worked and lived in the area, arsenic poisoned the water supply.

It wasn’t until this year that Lanare finally received clean drinking water with the assistance of a $3.8 million grant from the state to dig two new wells in the area.

It was a hard-fought victory for the Lanare activists, who have worked for decades to get clean water in the community. Elsewhere in the Valley, similar communities continue to struggle.

“A lot of what is happening didn’t just happen on its own,” said Veronica Garibay, co-director and co-founder of Leadership Counsel for Justice and Accountability, an advocacy organization based in Fresno.