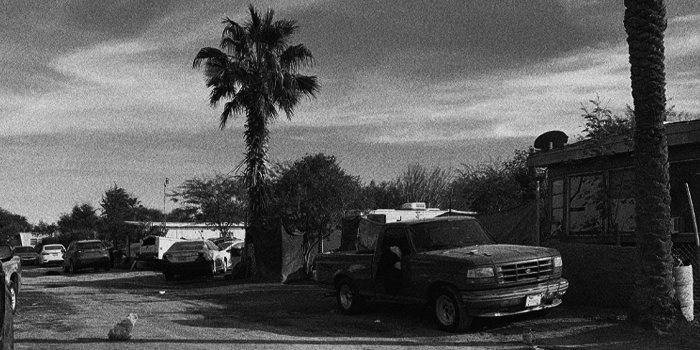 OASIS — For the hundreds of residents living in the Oasis Mobile Home Park in Eastern Coachella Valley, there is no place like home.

But in Oasis, home is not like that at all.

For years, the families that inhabit the roughly 250 mobile homes parked on desert land near the decaying Salton Sea have lived chasing a version of “home” they do not know.

Multiple tests by the United States  Environmental Protection Agency found arsenic levels in the water to be 10 times higher than the legal standard. It’s not safe for drinking or cooking. During the COVID-19 pandemic, some residents had their water shut off for 12 hours at a time. Large septic tanks are fed by pipes that are only a few inches below the ground, allowing for sewage to belch from the earth.

As elusive and unreliable as the basic resources have been at the Oasis Mobile Home Park, so has justice.

In recent years, residents have united to form “Juntos por un Oasis Mejor” — together for a better Oasis. The effort aims to counter the lack of care shown by ownership of the Oasis Mobile Home Park and its residents. On Wednesday, Jan. 27, 2021 residents united as plaintiffs in a lawsuit against Scott Lawson, the owner, in Riverside County Superior Court.

Residents believe Lawson’s failure to provide safe housing, maintain the park, and comply with lease provisions have created dangerous living conditions and have lowered the quality of life that working class families would like to provide their children.

Residents say they face frustrating situations. They worry their food will spoil when the electricity cuts out. That their employment does not provide enough to live off of. And that the monthly payments they make to the owner have not brought them safer housing.

The median household income for a family in Oasis is estimated to be $16,900 a year. Despite that, high rents and utility costs have left residents strapped. Families in Oasis pay an electricity rate that is 60% higher than the actual rate the Imperial Irrigation District charges the owner.

The unpaved roads, cracked ceilings and unsanitary, hazardous conditions at Oasis are the result of disinvestment and inadequate land-use practices in Riverside County that push many communities to live in uninhabitable mobile parks; some mobile homes in Oasis were built as far back as the 1960s.

Yet, escaping this reality is met with few options, as well as fear.

After U.S. EPA issued an order to bring the Oasis water system into compliance with arsenic, park ownership raised the rent and threatened fines. Shortly after, residents issued a cease and desist letter to stop those actions, and within 24 hours immigration authorities arrived at the park. Residents allege ownership coordinated with immigration authorities in retaliation for speaking out.

But those threats have not deterred residents from organizing to demand permanent solutions  to improve their families’ lives — a basic right that must be recognized.

In conjunction with the residents’ litigation, local, state and federal representatives and agencies must work alongside residents to secure long term solutions. That includes the construction of affordable housing and relocation assistance for all Oasis residents.

The scars from the historical neglect won’t fade so quickly. But residents may begin to heal if agencies responsible for justice can truly work alongside them to find home.

“I want to live in a better home and in a better location,” one resident from the park expressed. “Here, where we live, the truth is we are ignored.”

Legal theories residents have included in their lawsuit include breach of contract, breach of the implied warranty of habitability, retaliation, and fraudulent misrepresentation.