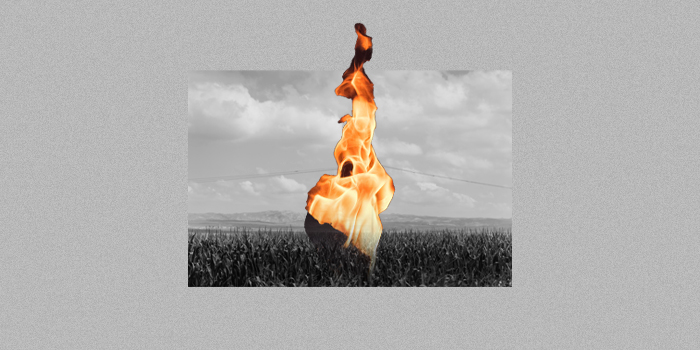 Communities in the San Joaquin Valley are exposed to some of the nation’s worst air quality, and bear lethal health impacts as a result.

The sources and types of air pollution that Valley residents breathe in every day — industrial pollution, diesel emissions, agricultural dust, pesticides, wildfire smoke — feel countless. Of all these sources, a practice called “agricultural burning” is among the least mentioned and the most preventable.

Open agricultural burning, or “ag” burning, is the “intentional use of fire for crop and vegetation waste management.” Under this process, fields on the outskirts of rural towns are routinely set ablaze, leaving community members to cope with the consequences of smoke seeping into homes.

The burden of ag burning has mostly been shouldered by low-income populations and persons of color residing in communities that are closest to these burns throughout the Valley.

Within three miles of Eduwiges Aguayo’s home in La Viña, in Madera County, several piles of vineyards are ready to be set on fire. Aguayo said living in a community that is surrounded by farm fields puts her and her neighbors at greater risk. She also suffers from asthma.

“(Environment officials) don’t pay attention to this problem,” Aguayo said in Spanish. “People don’t complain publicly about it, but just because they don’t complain doesn’t mean they don’t have a problem with it.”

Residents often receive no notice of these burns happening, and find out they are imminent only after they’ve driven past large piles of ag waste on empty fields. Aguayo said that vineyards around La Viña have often been replaced with almond trees. She thinks the new piles of dead vines just around the corner means just that.

She said the burns also tend to happen at night, when residents are least aware. Even then, the smoke is still active in the morning.

“Even though you can’t see it, you can feel it,” Aguayo said.

Sources of pollution like ag burning likely contribute to extremely high rates of childhood asthma and cardiovascular and respiratory illness, emergency visits, and deaths. The San Joaquin Valley is currently the only region in the nation not in attainment of the 1997 National Ambient Air Quality standard for particle pollution. This issue is worsened by an existing shortage of doctors in the region to treat those chronic conditions.

This week, the California Air Resources Board (CARB) will decide whether to approve another extension to allow agricultural burning in the San Joaquin Valley.

For years, residents have called for a more sustainable, non-combustive alternative to disposing of ag waste. In 2003, Senator Dean Florez did lead the passing of SB 705 bill which required the end of agricultural burning for all crop types in the San Joaquin Valley by 2010.

SB 705 outlines key requirements for Valley Air to receive an extension for ag burning, which have been questionably and repeatedly utilized by proponents of ag burning to keep the practice going.

Agricultural companies and the San Joaquin Valley Air Pollution Control District (Valley Air), which is in charge of regulating air pollution in the Valley, have known about the phase-out of agricultural burning for almost two decades.

The clear threat to the bodies of Valley residents living, working, and breathing near these burns has consistently been overshadowed by unwilling regulators and companies to move toward a truly sustainable, healthy agricultural industry.

Even though you can’t see it, you can feel it.”

Harris said neither of those responses from the air district represent a humane policy response to the serious health impacts that people living in rural San Joaquin Valley communities like La Viña are facing.

“The humane policy response would be to prioritize people’s health over what’s economically feasible to industry, and we hope to work with the San Joaquin Valley Air Pollution Control District and CARB on an end to all agricultural burning and instead a pursuit of healthy alternatives that do not produce pollution,” Harris added.

Communities are calling for the ending of ag burning once and for all. It would be more prudent that CARB vote to phase out agricultural burning immediately, and not by the 4-year timeline currently proposed.

One such alternative is soil incorporation; another is the practice of chipping and shredding ag material and using it as mulch, a process known as land application; and another is land composting, where organic material is aerobically decomposed and used as natural fertilizer and soil amendment. Residents like Aguayo believe these solutions would remove the threat to communities.

Some of these sustainable alternatives that restore the land — and don’t harm the air and environment — have long been researched, but not funded sufficiently to support a meaningful transition away from agricultural burning.

The limited funds that have been made available to farms so far since 2018 have not been directed to small-scale farmers and farmers of color who could most likely be impacted by a large-scale transition to sustainable alternatives and are caught in old ways.

For CARB, voting to end ag burning would be a step in the right direction in terms of meeting state air quality commitments and ending the consistent trend of sacrificing the health and wellbeing of communities throughout the Valley for short-lived profit. CARB can promote scaling and implementation of sustainable alternatives by voting to phase out ag burning completely, once and for all.

To share your experience with ag burning in your neighborhood with the California Air Resources Board, please:

Breakdown: The Good, Not So Good, and TBD of Newsom’s May Revise 2022-2023
With an unprecedented surplus revenue we call for bold and transformative investments. Much work remains to be done to ensure effective and equitable investments to advance environmental and racial justice in California. We look forward to working with community residents, advocates, legislators, and the administration to adopt a state budget that supports a resilient, healthy, and equitable Inland California.
Madera County Residents Deserve Community-Driven Process for Transportation Sales Tax Renewal
While existing communities’ transportation needs go unmet, the County is rushing to renew Measure T as a Forever Tax on the November 2022 ballot, despite its 2027 expiration date.
City of Merced Must Invest COVID Recovery Funds in Premium Pay for Farmworkers
Farmworkers are one of the most disproportionately impacted groups by the COVID-19 crisis. They kept the nation’s food supply going while many of us were able to shelter-in-place and work remotely, yet the City’s proposed spending plan does not provide much-needed assistance to farmworkers.