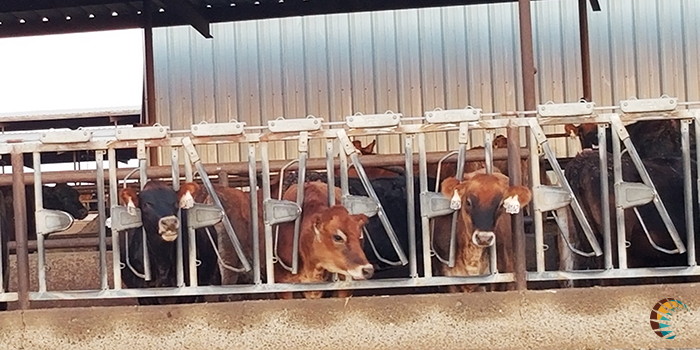 SACRAMENTO — One of California’s premier climate programs, the Low Carbon Fuel Standard (LCFS), is dramatically overstating the climate benefits of using methane gas sourced from factory farms as a transportation fuel, while illegally disregarding the disproportionate environmental and health impacts that dairy digesters inflict on low-income communities and communities of color. That is the conclusion of a petition delivered to the California Air Resources Board (CARB) today by a coalition of environmental justice, animal rights and community organizations.

The petition calls on CARB to exclude polluting factory farm-derived methane from the LCFS or amend the credit system to better account for the actual climate impact of using factory farm-generated methane as a transportation fuel and exclude those projects that entrench and exacerbate local air and water pollution. As currently formulated, the credit system overstates the emission reduction benefits of factory farm gas by failing to account for the fuel’s life-cycle emissions — from crop production, intestinal emissions and animal feed to the disposal of manure and pipeline leaks. In the petition, groups also emphasize that factory farms have been able to exploit the credit systems to “double dip” — using public dollars to subsidize the construction of dairy digesters, while also receiving millions for the credits sold through the LCFS.

“Communities feel completely blindsided by the rapid proliferation of these polluting manure-to-energy projects. We deserve to have more input when it’s our health that’s on the line, and we just aren’t seeing the benefits. What we are seeing is an entrenchment of the worst and most polluting parts of big agriculture,” said Tom Frantz, president of the Association of Irritated Residents.

In the petition, the groups identified CARB’s current program as a violation of the Civil Rights Act of 1964, asserting that the agency must consider the social costs of emissions to ensure that regulations do not cause disparate harms on the basis of race.

“Regulators have a legal responsibility to ensure that their policies do not have a discriminatory impact on the basis of race or income, and incentivizing manure-to-energy projects through LCFS fails to meet that bar. Low-income communities and communities of color disproportionately suffer the pollution burden, while these projects enrich Big Ag and Big Gas without even providing the promised climate mitigation benefits. It is not just unacceptable, it is unjust,” said Ruthie Lazenby, environmental justice clinical fellow at Vermont Law School.

In addition to incentivizing the expansion of factory farms that pollute communities, clean transportation advocates contend that LCFS credits for factory farm methane also perpetuate the false claim that compressed gas, whether it is fracked or from factory farms, is a solution for reducing smog-forming NOx and climate pollution from heavy-duty trucks. NOx pollution from methane powered vehicles is often just as high as NOx pollution from diesel trucks — and at times can be even higher

“The inclusion of credits for factory farm gas in the low carbon fuel standards perpetuates the dangerous myth that gas powered trucks are a viable alternative to electric trucks, when the reality is that switching from one polluting vehicle to another would lock in decades of unnecessary climate and air pollution,” said Paul Cort, director of Earthjustice’s Right to Zero campaign.

A failure to consider the true pollution and climate warming impacts of factory farm gas in the LCFS will impact the efficacy of other transportation pollution reduction policies insofar as they rely on LCFS investments in dairy- and swine-produced fuels. The CARB Board will consider adoption of the Mobile Source Strategy at a meeting tomorrow, which counts on increased production of factory farm gas without consideration of its air, water, and climate impacts, especially in lower income communities and communities of color.

“The pollution trading scheme creates more pollution in the San Joaquin Valley from factory farms while perversely allowing Big Oil & Gas to greenwash their fossil fuel products. Communities on both sides of the transaction suffer discrimination and pollution — an extension of the racism, exploitation and extraction embedded in the factory farm and fossil fuel systems,” said Brent Newell, senior attorney at the Public Justice Food Project.

“Factory farm gas is being used as a smokescreen for the harms inflicted on vulnerable communities nearby factory farms under the guise of sustainability. This petition with our partners is a first step toward revamping how the California Air Resources Board addresses the inflated benefit of biogas to tackle climate change,” said Stephen Wells, executive director for the Animal Legal Defense Fund.

Food & Water Watch Legal Director Tarah Heinzen said, “As long as CARB allows biogas sourced from factory farms in its Low Carbon Fuel Standard program, California is directly subsidizing the expansion of these industrial facilities, and in turn increasing the dangers they pose to our climate as well as environmental justice communities. Factory farm digesters rely on the most environmentally harmful factory farm practices to create methane, a potent greenhouse gas, and also cement our dependence on fossil fuel infrastructure. Communities on the frontlines of factory farming across the country will continue to bear the public health burden of this industry as long as biogas is included in the Low Carbon Fuel Standard.”

FRESNO — Over the past few years, South…

Leadership Counsel for Justice and Accountability chosen as a 2021 Nonprofit of the Year
Nonprofit honored by CA Assemblyman Joaquin Arambula
Community of Fairmead in Madera County Secures Investments as High Speed Rail Seeks to Pass Through
For more than a decade, Fairmead Community and Friends (FCF) have had a consistent message: if High Speed Rail (HSR) passes through Fairmead, the HSR Authority must listen to residents, invest in Fairmead’s future, and commit to improving the community.